Which is the best solar cooker?

To help you decide which is the best solar cooker,I would like to note my likes and dislikes of the "Solar Burner"; among other parabolic cookers that we carry here on this site. 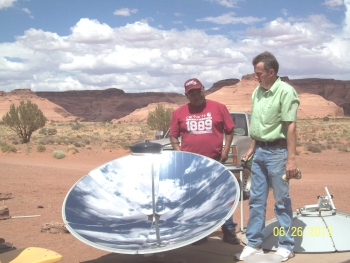 Some of the things I like about the "Solar Burner" are:

Note: The Solar Burner is manufactured overseas,where most solar cookers/parabolics are, thus the "finish" and "detail" quality are not quite as fine or, to standard, as can be found in US or European manufacturing plants. This does not affect the effectiveness or capacity of the cooker, but rather more so the "aesthetic" aspects.


On a bright day it takes less than ten minutes to boil two cups of water. (Paper will ignite in two seconds under its focused energy)

(I guess if it was collapsible then it might be even easier to transport, but it would probably be much more expensive.) See our portable high quality French made parabolic solar cooker

Do these pluses and benefits make the "Solar Burner" the best all around solar cooker on the market? 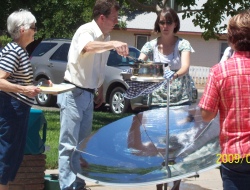 Some things that I don't much care for about the "Solar Burner".

(My kids use the Solar Burner also with out much problem, but yes, stretching can be a little inconvenient for shorter people)

(This is easily remedied though by cleaning up the splatters right away or right after cooking, and then it does not stick permanently)
* Note: much of the splattering and dripping can be avoided if one uses deeper pans and lids whenever possible.

(Polished aluminum reflectors would of course make the cooker more expensive and a bit heavier. Mylar wears out with much use and cleaning, but of course it is much less expensive than the aluminum. And adhesive mylar can be used to repair and replace worn areas of the panels at minimal cost.)

(Our children, ranging in age from 12-19 years, have learned how to use the "Solar Burner" quite well and are quite responsible around it)

After all that has been said; for the price, and considering the many uses and benefits that the "Solar Burner" offers, I have been very satisfied with my little parabolic solar cooker and will continue to use it every day the sun is shinning.

If this sounds like a solar cooker that would serve your purposes you can order direct from our site...

$250.00
Includes Shipping Continental US
(does not include grate)

Greetings, my name is Joe. I've been reading and watching the videos about the solar cookers you sale. Out of the following three, which one does a better job , which one would you personally choose: the Solar Source Parabolic cooker, the Sun Chef Cooker or the Solar Burner Parabolic cooker? Thanks. Joe

All three cookers are very good parabolic cookers and each would do a good job at what they are intended for.
I will have to say though that many of our customers over the years have gone with the Solar Burner because it is
the least expensive, but that does not mean it is the least effective.
In fact, it is the most powerful parabolic we have because it is the largest one we carry.
It is not quite as fancy as the higher end models, but it is a ruggedly built cooker and will take a beating.
I suggest though that it will last much longer if it is taken care of.

The Burner is not as easy to disassemble for storage purposes, but it can be stored easily in a garage or shed if you have the room. I keep my Solar Burners outside in the backyard, face down on a tarp which can be pulled up over it for protection and the easy  access when I want to cook.

I guess the choice would depend on how much money you are able to spend.

The SolSource is the nicest parabolic we have and it is probably the highest quality and performance ability for its size (3.5 ft. diameter)and for the money.

The Solsource is really well built.
It's really easy to assemble and disassemble as well.
But, of course it is our most expensive model.
It definitely is worth it's cost if you are willing to pay that amount.

The Sun Chef is a really nice cooker as well material wise and it is lightweight and easy to use, but I would probably give the SolSource a slight edge over the Sun Chef when it comes to easy of use and storability.
This cooker costs more than the Burner by quite a bit, but is a bit less than the SolSource.

I personally like all three of these cookers, and I use all three, but I  use my Solar Burners a bit more than the others because it is a bit more powerful.

There is much more I could say, but for a lack of time cannot.

So, I hope this is somewhat helpful.